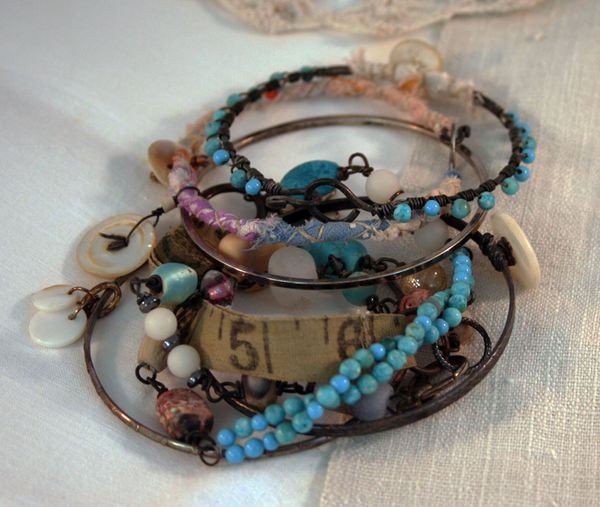 Yes, I do.
Spray paint is my favorite type of paint and I love using it in my journals. 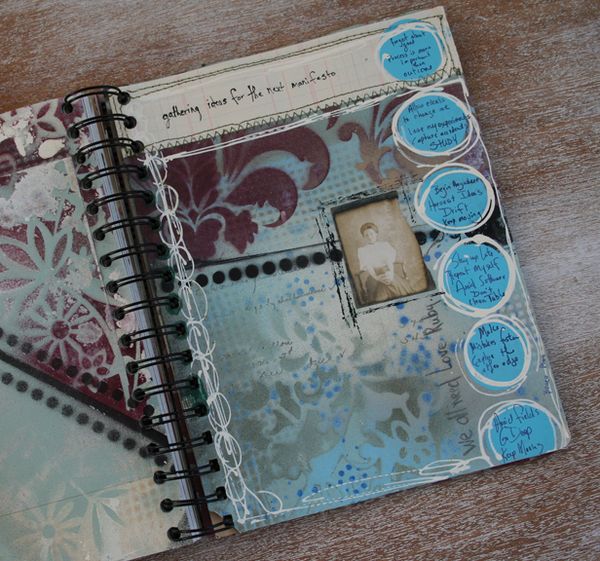 This journal is a recycled wire bound desk type calendar.
I took the calendar apart, saved the pretty pages and spray painted several of the actual appointment pages.
They rest of the pages went to the paper recycling bin.
I re-bound the pages to make the wire bound journal. 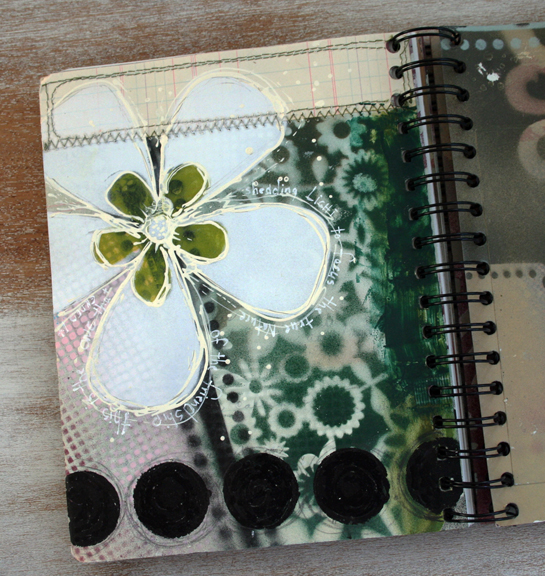 Some pages still show evidence of spray paint and stencils. 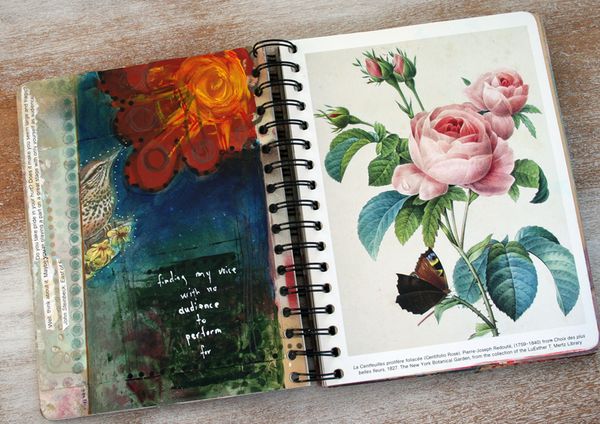 Some end up nearly covered with other paint and markers. 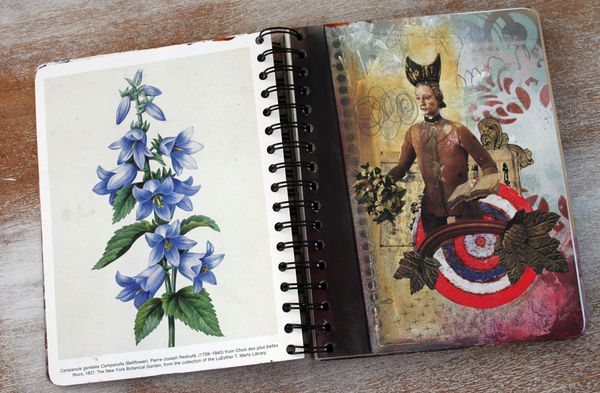 I like the original calendar pages mixed in with the journal pages that I make. 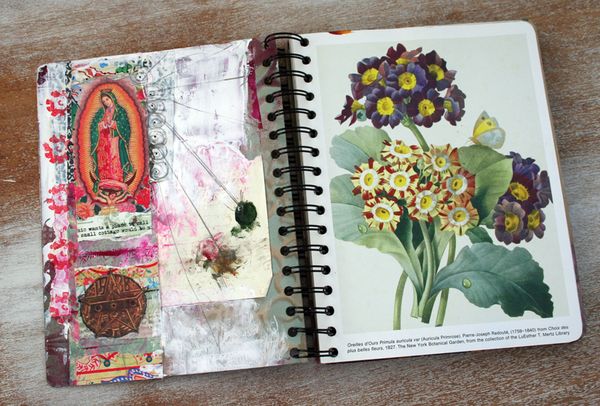 This page was made with torn pieces of a copy of an original collage I made in 2007.
I like doing that.  Give it a try, make a good copy of an original piece of your artwork, then tear the copy up and use it for journal pages.
Then make a copy of your that journal page with the torn collage and tear it up and reuse it.
So you see where this is going, the results are infinite. 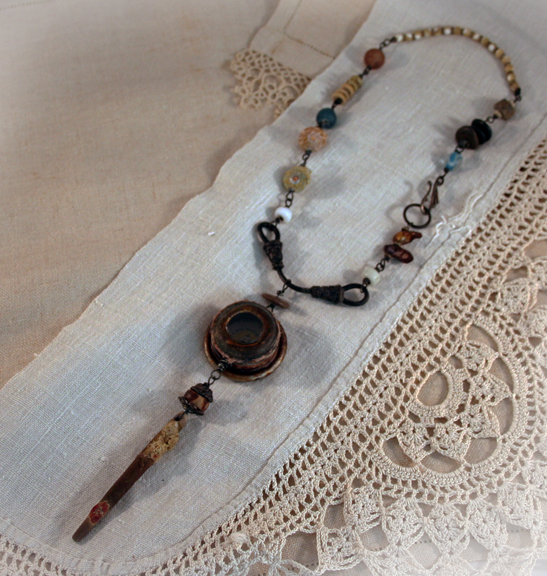 distracted by the sights on the horizon

Sometimes a day's color and tones will set the inspiration for the entire day. 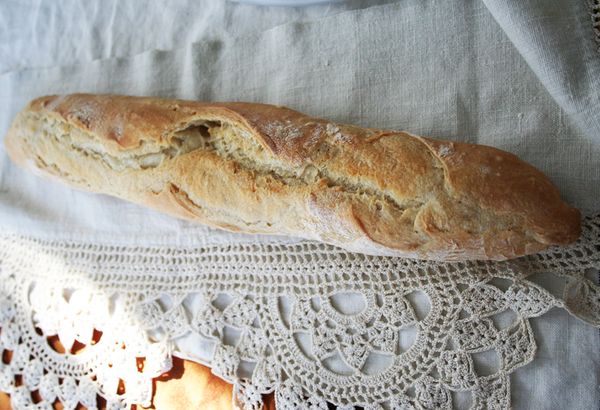 My day started with making a baguette for lunch. A gem of a baguette if I must say so and with the added bonus of a house filled with the comforting aroma of baked bread. 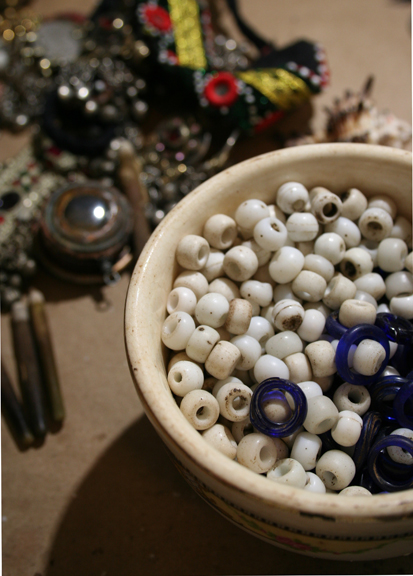 Sitting at my work table, I then become hypnotized by a vintage ironstone bowl filled with old creamy white beads. Becoming distracted is what I do best. 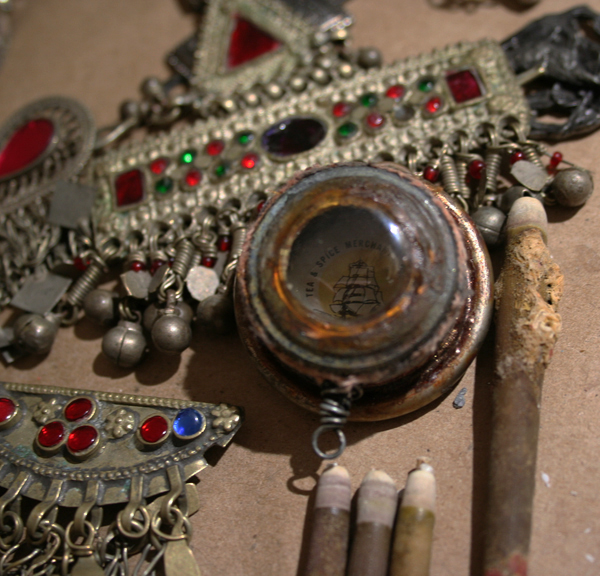 Then there was some digging around to find the right pieces to add to this focal (the bezel of found metals with the tall sails ship) that was made over the weekend. As typically the case, I was then easily mesmerized by a band of feathers and made this piece below.

I think that I am so enthused about the tall sails ship bezel of found objects that I showed above, that I allowed myself such distraction, if that makes any sense. Sometimes a project is so exciting that I can only work on it for short periods of time, kind of like dragging out reading the end of a really good book.

If I had only thought to take a picture of the tall sail ships that were trying their best to divert my attention from the studio over the weekend, I could have shared more inspiration but instead this was my morning's sunrise. 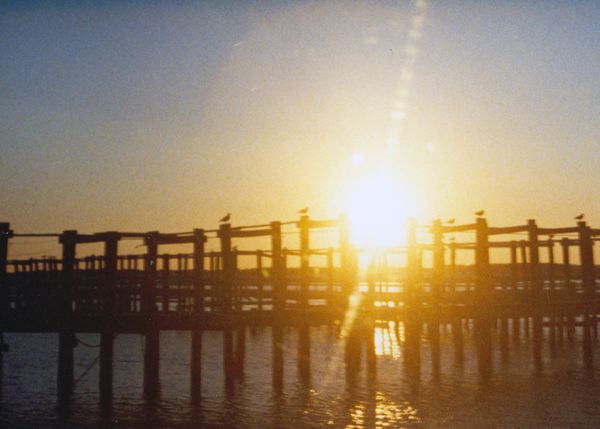 A few items have been added to the etsy shops. 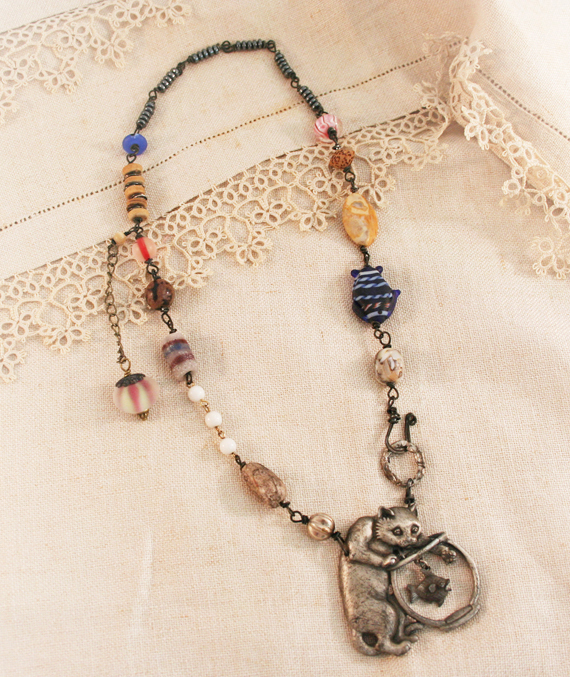 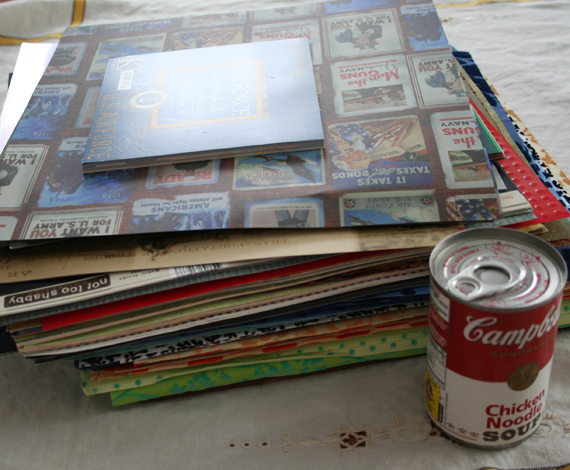 another paper collection from my studio de-stash efforts 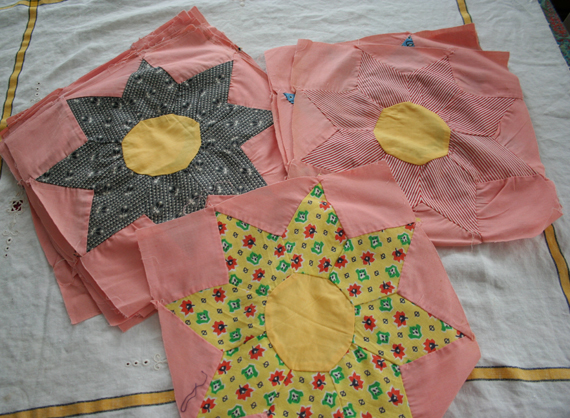 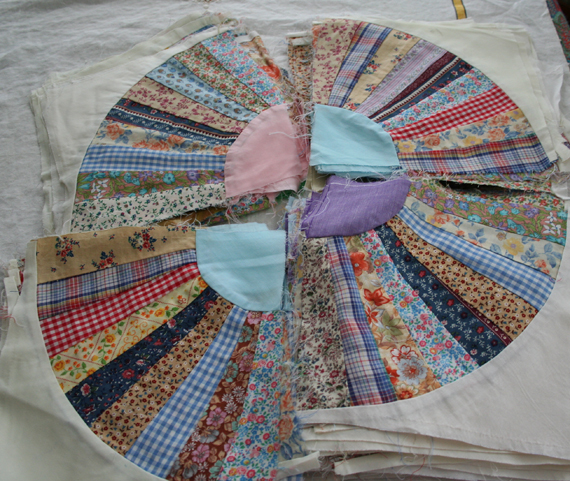 lots and lots of quilt blocks - 92 in this collection

Just click on the highlight text and the link will take you to the etsy listing.  I am always happy to combine anything in the two shops if they will package together safely and will refund any excess postage through PayPayl.

the secret lies in the crust

There has been an ongoing challenge to make a perfect baguette in my home.

A few weeks ago, we went to pick up bread from the local shop that had marginally okay baguettes but there were no baguettes in the basket. When I asked at the counter, they explained the truck didn't come in.

It was at this point, I decided we could do better than frozen baguettes arriving in trucks.

So the quest was on for a recipe and consistent results to make my own like incredible memorable baguettes from Pascal Barillon, Au Levain d’Antan” 6, rue des Abbesses, Paris.

The recipe I used was from the Artisan Bread in Five Minutes a Day book and this pan.  I have to compromise on time, so the recipe in the book was a good starting point and after a bit of experimenting and editing, the recipe works.  I was surprised to find how flour can vary from region to region and between different companies. So my best advice is to experiment with trial and error to come up with a recipe that works for you. My other compromise is in the oven but the pan worked well even if the loaves are a bit short.

I do want to experiment a bit with different salts. 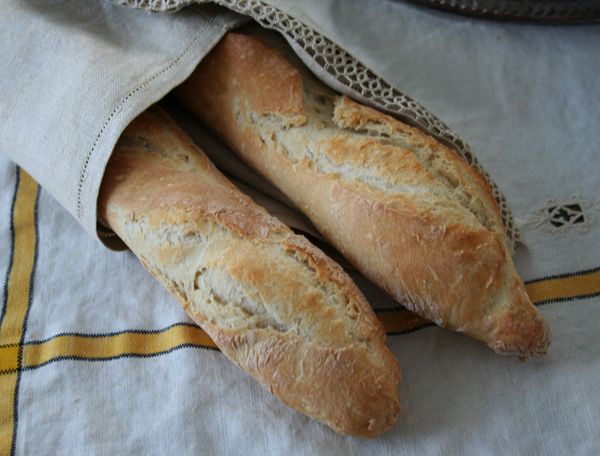 There were many bad baguette the past few weeks but today's results were near perfect.

So true the French culinary wisdom that the secret to a good baguette lies in the crust. 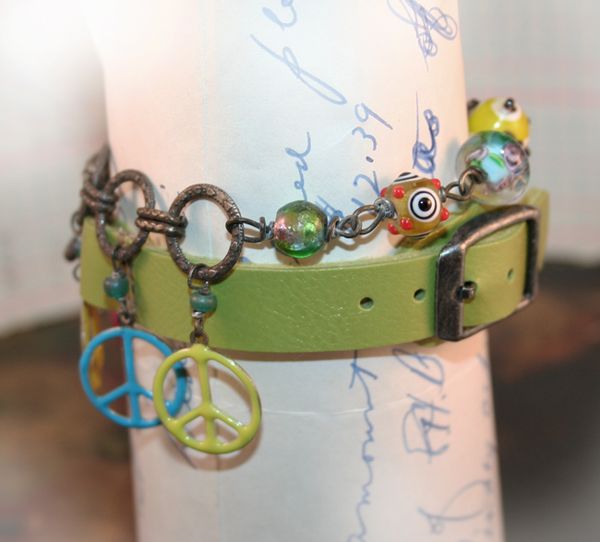 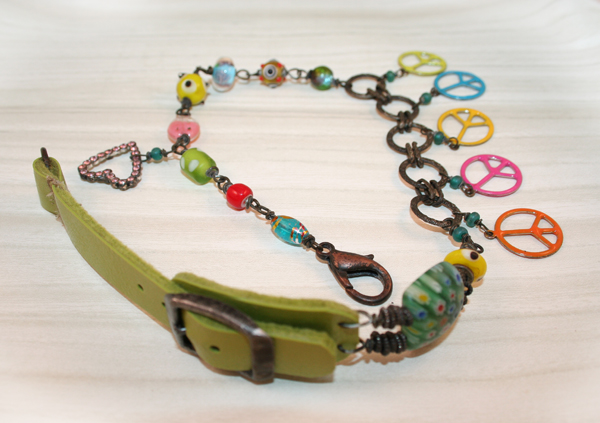 more pictures and details in my Etsy shop

Ccomposition books are a favorite of mine to use as daily journals.
I like them so much, that I have shelves of ones that are filled. 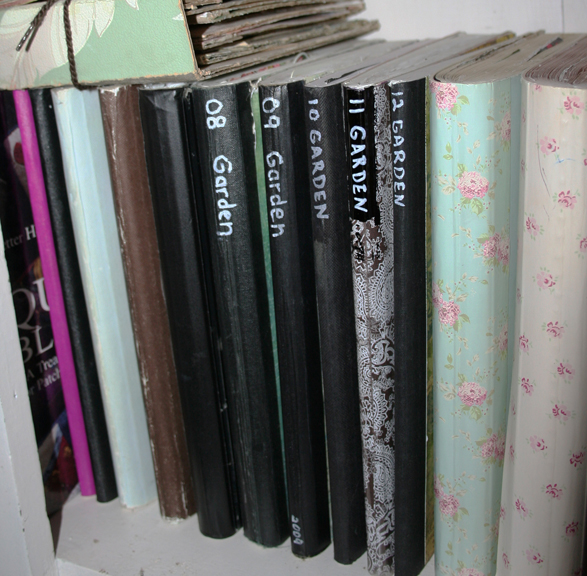 They are sturdy and cheap. The cheap part being the best as they are not intimidating to actually use. Easy to toss in a purse or bag, I always have a composition book with me to record ideas, thoughts or just tidbits of the day. 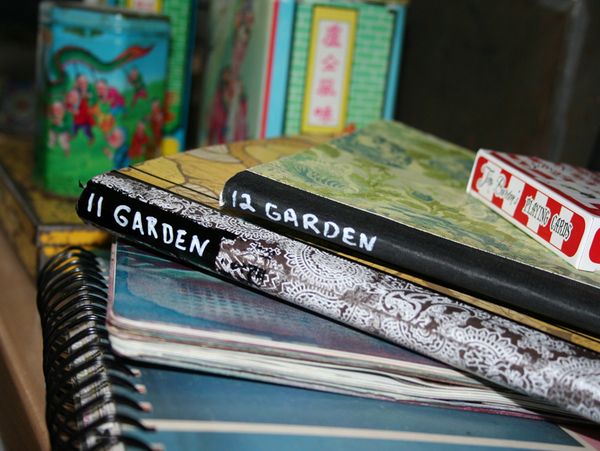 They make great garden journals and inspiration journals. In December, I find time to make a few for the new year. All it takes is a bit of collage on the front and back covers. 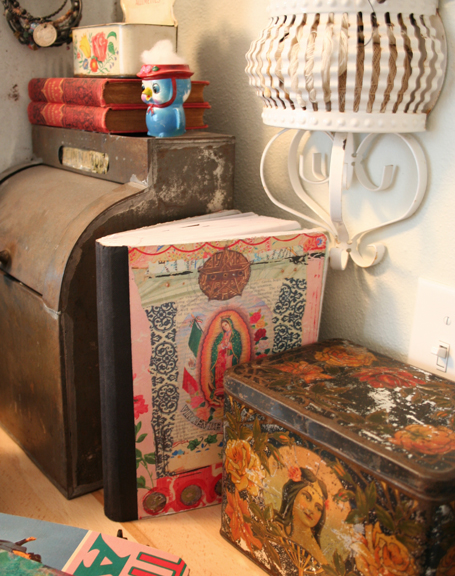 But some journals don't notice the passing of a year and are oblivious to time. Always ready for a journal entry and then happily shelved when it is full. 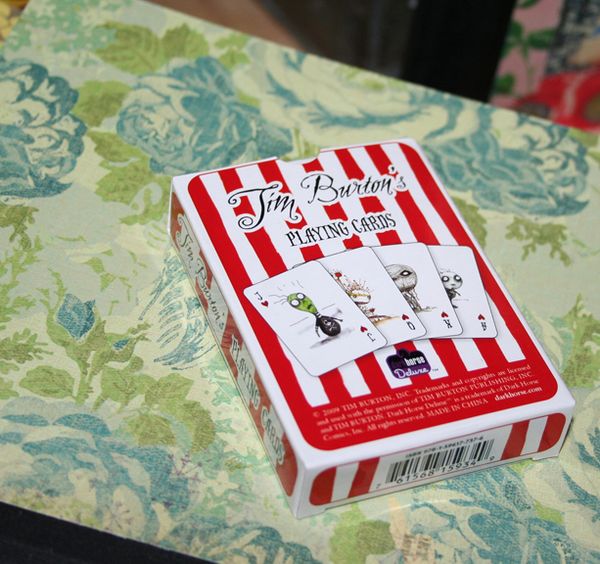 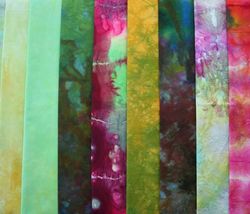